As predicted, the month of May was as awful for shippers and importers. Congestion at various ports continued and in fact spread to other ports. Carriers had numerous blank sailings. Ocean freight rates spiked to heretofore unseen levels. Massive amounts of freight continue to build up in Asia, waiting to ship without any vessels available to carry the freight. Unfortunately, the forecast for June is not expected to be better. If anything, June may be worse.

Port Congestion and the Crisis of Limited Capacity to the Port of Oakland
The following chart published by Maersk illustrates the extent to which various North American ports are backed up. 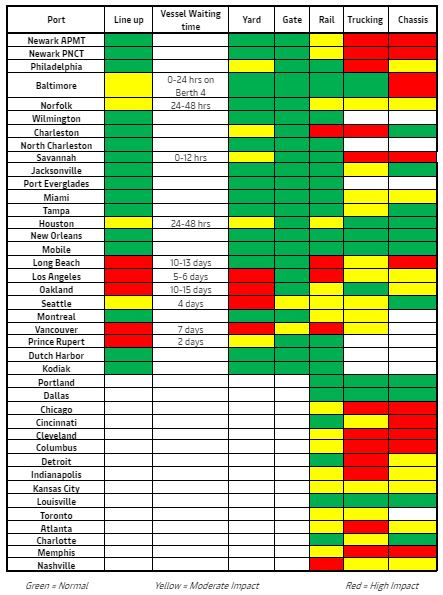 The vessel delays in Long Beach can last two and even sometimes three weeks. The vessel wait times in Oakland now average as long, if not longer than those in Long Beach. We’ve seen some vessels in Oakland delay as long as three weeks before being worked on. Most vessels that call Oakland call Los Angeles/Long Beach first. Carriers have effectively made decisions to limit the number of sailings to Oakland as they cannot afford to have vessels stuck for two weeks in LA/LB and then another two weeks in Oakland. Various carriers are making decisions to call Oakland on either a biweekly basis, monthly basis, or completely removing Oakland from specific strings. This drastic reduction in capacity to the port of Oakland is causing a divergence in pricing for containers coming to Oakland versus those going to LA/LB.

Importers wishing to ship to Oakland must prepare for huge delays. In some cases, if shipments are urgent, they may even need to consider shipping to LA/LB and trucking the goods up to Northern California.

Blank Sailings
The number of blank sailings we saw in May may in fact rise in June. A simple look at Maersk’s most updated sailing schedules show how many sailings are either blanked, at risk of blanking, or already delayed.

What this means is that there is no end in sight for the congestion along the Transpacific supply chain. The supply chain as is cannot absorb the massive amounts of cargo waiting to ship from Asia.  As we’ve mentioned in previous posts, the supply chain would be coming to a halt. From talking to importers and factories, our belief is we are slowly starting to see this come true. Various factories are having to stop or slow down production as there is no room to store newly made product when there is still large volumes of product on the floor waiting to ship out.

Rising Freight costs
The cost of ocean freight continues to spike. From many ports, we are hearing that space is already booked through the month of June. This means that importers are left to fight for whatever space happens to show up in the market at the last second. The rates for shipping were already out of control in May. We are already seeing that June rates will be even higher than those in May. Various importers have indicated these new rate increases are unsustainable. They are delaying shipments or reducing shipping volumes rather than engage in the bidding war for space. Perhaps this will finally put some pressure to stabilize the ocean freight rates.

The massive congestion in ocean freight continues to also lead to obscene rate increases in the air freight market as well. Desperate importers are forced to make decisions to pay for air freight at extremely high rates rather than wait for the two or three months it might take to transport cargo via ocean freight.

Unfortunately, there is no relief in sight. Importers must plan for congestion to continue and for shipping costs to continue to rise.