As we mentioned last fall, global ocean freight shipping was on the verge of facing shipping Armageddon. There was a huge shortage of equipment (empty containers), vessel delays, and sharply increasing shipping cost. In the past six months, this crisis has indeed come to pass and has in fact worsened. Many importers were hoping that once the 2020 winter holiday shipping season was over, the congestion issues would slowly dissipate. Instead, what we experienced in January and February 2021 was only a deepening of the crisis. The New York Times recently wrote an article detailing the extent of the global shipping meltdown. There are many aspects to the current shipping crisis.

Space
Even though all carriers have increased their vessel capacity over the past year, there is still a serious shortage of space on vessels. In the lead up to the Chinese New Year, numerous importers were already advising that they were one month behind in shipping. During the Chinese New Year, we saw numerous containers rolling over from one vessel to the next. In the weeks since Chinese New Year, carriers are still struggling to catch up with the demand for shipping. What has exacerbated the situation is actual vessel sailing schedules have become completely unpredictable due to long vessel delays at various ports. We regularly are seeing vessels depart days if not weeks later than the original scheduled departure date.

Transit time
Ocean freight transit time has seemingly doubled. On any one day at the ports of Los Angeles/Long Beach, there are at least two dozen vessels anchored outside the port. In years past, a vessel arriving at the ports would rarely have to anchor outside the port for even one day. Vessels would typically sail straight to the dock to have containers unloaded. We are now seeing vessels anchor outside Los Angeles/Long Beach ports for at least a week, if not longer, before docking. Here is a screenshot from the Vesselfinder website showing the vessels anchored around Los Angeles. Each of the yellow dots represents a container vessel 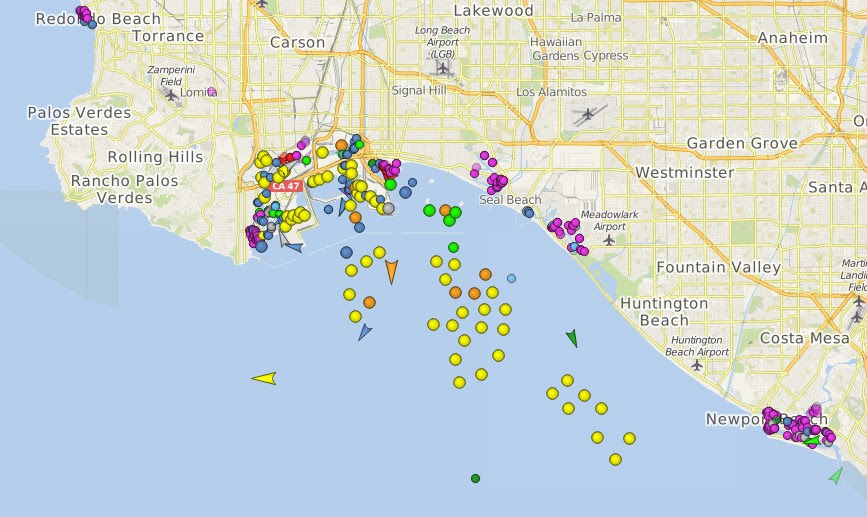 These type of port delays are also showing up at other ports. The port of Oakland is now also regularly sees a dozen vessels anchored outside waiting to dock.

Rates
Ocean freight rates have steadily increased in the past 6 months. Carriers have used this seller’s market to continually increase the rates every few weeks. For various routings, carriers have even created different service offerings. Importers can pay for “premium service” on certain routings. However we saw in certain cases before the Chinese New Year, “premium service” was required just to get bookings, and wouldn’t even guarantee a container would get on a scheduled vessel. Rates have continued to stay high in the weeks following Chinese New Year as demand for space remains high.

Drayage
Lack of drayage capacity has remained a problem during this six month period. Truckers at the port of Los Angeles/Long Beach have continued to require advanced booking weeks in advance. Other inland rail destinations such as Chicago and Dallas have also had massive trucker shortages. This shortage was made worse in recent weeks due to extreme winter storms. This has resulted in numerous containers facing potential rail storage fees.

Most industry experts are predicting the global shipping congestion problem to be an issue at least through the early summer if not beyond. With a massive backload of consumer goods still ready to ship out from Asia, the congestion issues may remain with us through the end of the year.